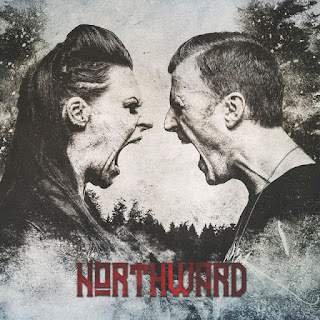 While Love Died, the debut single from the duo, flies out the traps with catchy grooves and stylish flourishes from Lofstad - a stark contrast to the lyrics which tell of a destructive relationship. It's an great track, capped off by a tone setting fun guitar solo.

Storm in a Glass rocks up with a mainstream pop-rock approach. It has more in common with the first track on the record but presents softer tones.

Drifting Islands slams back into the hard rock lane and pushes hard on the accelerator. Soft verses are sandwiched between the crunching intro riff and pounding chorus.

Paragon is the first of two long tracks and blends acoustic led verses and big choruses. A story of being your best self, it's a quaint message that combines nicely with the style of the song. With a voice as capable as Jansen's, she expertly portrays both vulnerability and strength during each section.

Let Me Out sounds like it could be drawn from a Sixx A.M. record. A big, crunching riff sets up a groovy verse and a pop-rock ish chorus, before an avalanche of Jansen harmonies flows straight into another outstanding solo from Lofstad.

Big Boy is a dark, dirty, thumping track. The guitar tone is almost as sludgy as the subject matter (which Jansen says to take with a pinch of salt), and rhythmically is sure to have the crowd bouncing and head banging at shows.

Timebomb sums up the tone of the album in the opening seconds: a blood-pumping hard rock/metal riff followed by a soft verse. This track is easily the most diverse on the record. Heavy riffs bookend the pop-rock verses and it ends with a Jansen wail. It's chaotic, but that probably serves the title of and story of the song - a running theme.

Briddle Passion is heart-wrenching. A stripped back acoustic number with exceptionally emotional Jansen vocals. It's a well placed calm moment in the record, and despite the radical change in tempo, feels just as integral as the other songs.

I Need saunters into position with the building anticipation of bass and drums, before about 20 seconds in smashing you in the face with a massive riff and heart pounding rhythm from start to finish.

Northwards is the title track and is Jansen's story of traveling north from the Netherlands to Scandinavia to join Nightwish. It's a story we can all relate to; leaving our familiar surroundings behind to follow a dream, and while we may be excited, it can be an incredibly scary and uncertain time. At seven minutes in length it's got a prog element to it and is the closest Jansen's vocals come to matching what we're accustomed to hearing.

You can't complain about a lack of diverse songwriting on this record. From hard rock, to pop-rock, to a bit of prog, there's something for everyone.
Posted by Dan Deakins at 07:33